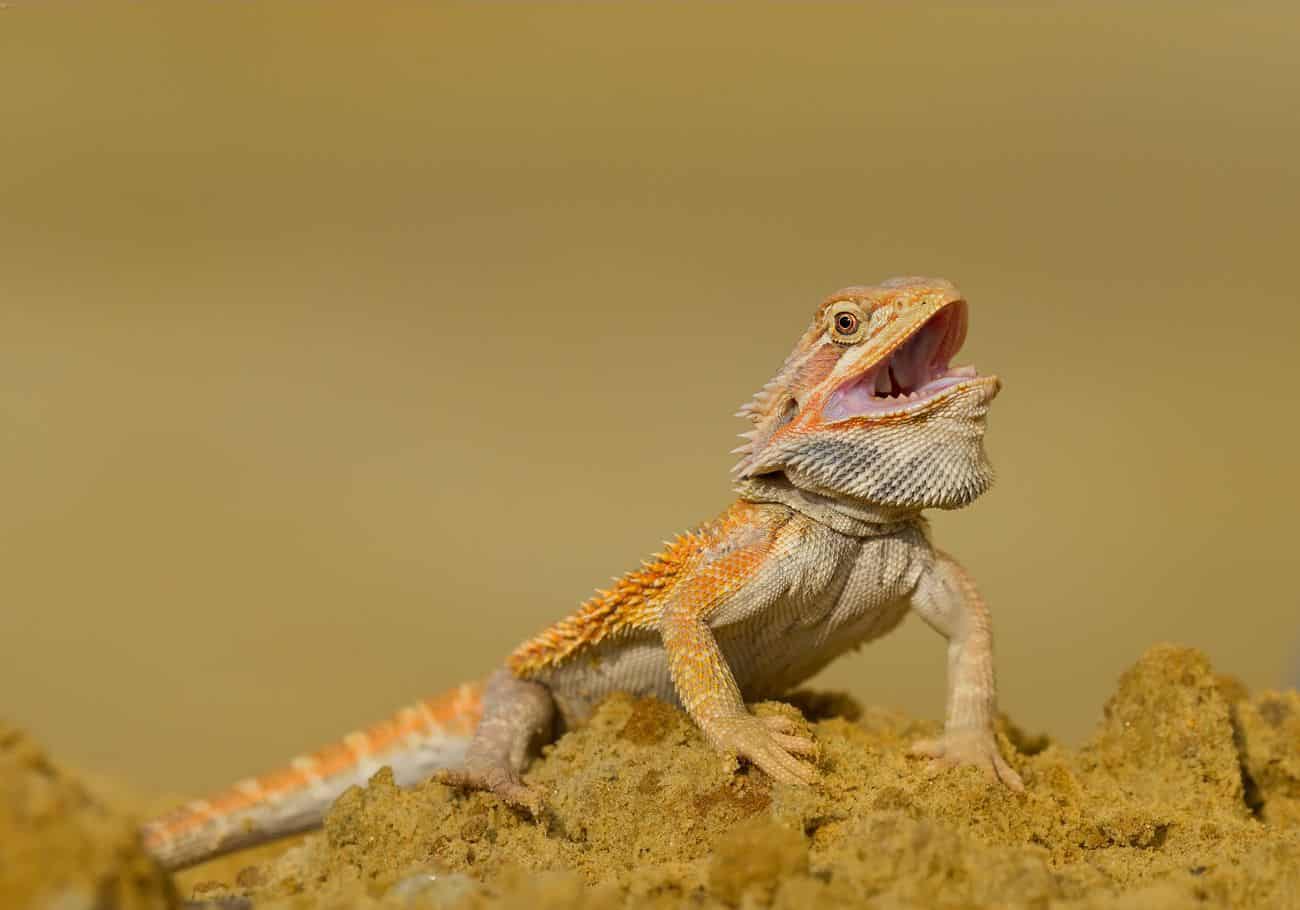 A bearded dragon with its mouth open can be an odd sight at first. Everything else might seem completely normal, but they insist on holding it open!

This is one of the most common questions we get from beardie owners, and there are a few possible reasons. To figure it out you need to be attentive and do a little detective work.

To make the process easier, we put together a handy list of the common reasons why bearded dragons open their mouths for extended periods of time. All you’ll need to do is follow along and find the reason that fits!

A bearded dragon with an open mouth is actually fairly common, and that’s usually because of the first reason on our list. Often when a bearded dragon holds its mouth open they’re doing it to regulate their body temperature. In fact, this behavior is so common that it has its own name, gaping.

You are most likely to observe your beardie gaping when they are basking. Once a beardie has reached its optimal temperature, they will open their mouth (where heat can exit) to prevent becoming overheated.

If you observe your lizard under their basking light and they have their mouth open, this is most likely normal behavior, and there is no reason to be concerned. Bearded dragons open their mouths to cool themselves down the way humans sweat to regulate body temperature.

Expert Tip: Your bearded dragon will require different temperatures based on their age and the time of day it is. The basking area should be 100-110 degrees Fahrenheit for baby beardies and 96-100 degrees for juveniles and adults. They can visit this place to warm up, and either leave or open their mouth if they need to cool off.

All animals need to stretch their muscles when they haven’t been in use for a while. Humans commonly stretch first thing in the morning, after sitting in the car for a long drive, or after sitting through a meeting.

Beard stretching is commonly seen when your beardie is getting ready to start shedding. You might also see your lizard puff out their beard around shedding time. Both stretching and puffing help your beardie loosen the skin around their beard and head so they can shed it.

In general, bearded dragons opening their mouths to stretch their beards is a normal behavior (even if your lizard isn’t getting ready to shed). This is something you’ll learn to recognize over time!

Bearded dragons are generally calm and docile lizards. However, if they feel threatened, angry, or afraid, they may open their mouths as part of an aggressive stance.

When an animal feels threatened or afraid, it will go into a fight or flight response. A bearded dragon will puff out their chest, raise their beard, and open their mouth wide to appear larger and more threatening. Your beardie may also hiss, display a black beard, adopt a tall stance, and quickly bob their head if they feel defensive.

Expert Tip: If your beardie feels especially aggressive, they may bite you if you attempt to handle them. A bearded dragon’s bite might hurt, but it shouldn’t cause serious injury. While your beardie actually produces venom, it is not poisonous and won’t harm you.

There are several situations in which you might see your beardie become aggressive. Your lizard may feel threatened by another pet in your home, such as a cat or a dog. If they do, they will adopt a defensive stance with their mouth open.

There are two things you can do if a larger pet is bothering your bearded dragon, resulting in them holding their mouth open:

First, you can try keeping your larger pet out of the room your beardie resides in. This may be difficult if your beardie lives in the living room or dining room or if you live in a small apartment.

Placing your beardie’s tank near a window can be great for their mind because the outside world provides them with stimulation. Your beardie may love seeing the trees rustle in the wind or the clouds move in the sky. However, animals outside, such as birds and cats, can leave your bearded dragon feeling threatened.

If your lizard’s tank is near a window, you may occasionally see them open their mouth as part of the aggressive stance in response to animals outside. However, if you see this behavior often, you should probably move your beardie’s tank away from the window.

It may sound odd, but small objects can also cause your lizard to feel threatened. These items can include clothing, toys, and ornaments or decorations. If you suspect your beardie is being stressed out by a small object in the room they stay in, move the object to another location.

4. They’re Responding To Another Bearded Dragon

By nature, bearded dragons are solitary creatures. If you try to house two of them in the same tank, problems are likely to occur.

Usually, when you try to house two bearded dragons together, one will try to dominate the other. The dominant one will open their mouth to show the other that they are the alpha. The less dominant beardie can become quite stressed, stop eating, and not even be allowed to bask near the more dominant lizard.

If you see this, you need to separate your beardies into two different tanks. You may even need to put the tanks in separate rooms because if your beardies can see one another, the fight for dominance may continue despite them being in separate tanks.

Bearded dragons are territorial. When you house two together, the more dominant lizard might hold its mouth open (this doesn’t happen all the time though) and protect certain areas of the tank from the other. These areas will include hiding spots, caves, and the basking spot.

Expert Tip: During certain times of the year, your lizard will experience a shift in their hormones. During mating season, your beardie may become aggressive if you or other pets in the home approach their tank.

This is normal behavior, and there is nothing you can do about it. After mating season, your beardie’s hormones will return to normal, and they will be your sweet lizard once again!

5. They Have A Respiratory Infection

Respiratory infections occur when the humidity in your lizard’s tank exceeds 40% for a prolonged period of time. That’s because bearded dragons are used to being in hot, dry climates.

If your bearded dragon is holding its mouth open and displaying other symptoms, it’s a good idea to take them to the vet. They will be able to assess the severity of the infection and give you a plan to help them get healthy again.

Here’s what you can do to avoid this from occurring:

You should have a hygrometer for your lizard’s tank to measure the humidity level within the vivarium. If you notice that your beardie’s tank’s humidity level is above 40%, you can do several things to lower it.

If you use a water bowl, make it a small one, and keep it away from your lizard’s basking spot. Do not use moss or bark in your bearded dragon’s tank; both materials retain moisture. You can also try adding more ventilation to your beardie’s tank to lower the humidity level.

If these methods aren’t lowering the humidity level inside the tank enough, you can purchase a dehumidifier and place it in the room where your bearded dragon resides.

As you can see, a bearded dragon keeping its mouth open is usually nothing to worry about. Most of the time this happens while they’re basking (aka gaping), and you’ll see this behavior quite often over the years.

However, there are situations where it can indicate something more concerning.

If your bearded dragon has an open mouth because of repeated stress or a respiratory infection it’s your job to sort out the problem. If they’re sick, take them to the vet. If an adjustment needs to be made to their living situation, do it ASAP!

Once you have everything finely-tuned, an open mouth will never be something that concerns you again. 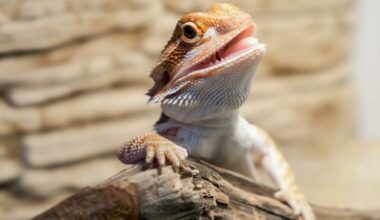 Read More
Eggs are cheap, high in protein, and easy to prepare. So it’s only natural that many bearded dragon…
RResources 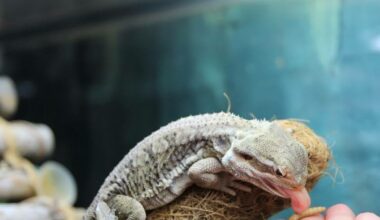 Read More
Feeding mealworms for your bearded dragon might seem straightforward, but there are a number of things you should…