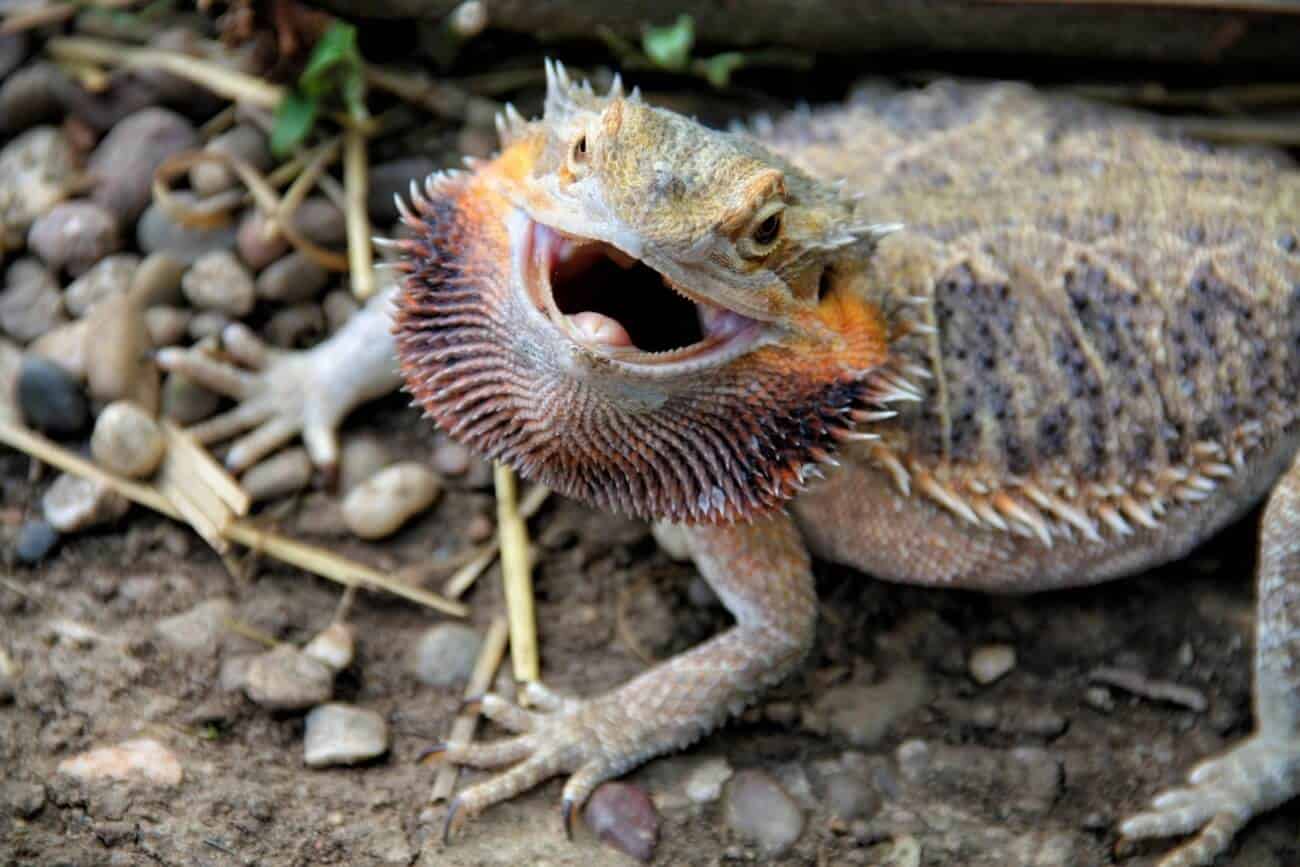 Why Bearded Dragons Puff Up: All Possible Reasons

Learning why bearded dragons puff up is a skill that you’ll need to develop as an owner. This common sign is used for a number of reasons, and it’s not always easy to figure out the cause!

To help speed up your learning curve, we put together this detailed guide to help you understand. When you combine this with a little experience, their inflating beard won’t be such a mystery anymore.

Why Do Bearded Dragons Puff Up?

An experienced bearded dragon owner will tell you that one of the most fascinating (yet common) behaviors among these reptiles is puffing up.

But if you’re new to keeping bearded dragons, you might be alarmed the first time you see your pet exhibiting this behavior! In fact, many owners wonder if something is wrong when they see it happening.

So to make things clear, there’s usually no need for concern when this happens. This behavior doesn’t harm the animal and may be just their way of instinctively helping themselves feel safe when they feel threatened.

You see, bearded dragons often puff up when they’re stressed. Much like a cat fluffs up its tail and arches its back in the familiar “Halloween” pose, a bearded dragon puffs up (or seemingly inflates) to appear larger and threatening in order to fend off predators.

When a bearded dragon attempts to look aggressive, its beard may turn black. Sometimes, however, the beard won’t turn black when they puff up. There are a number of possibilities for this, but one common reason is that they’re actually in a happy state of mind!

This behavior is often seen in babies as well.

If you’ve just brought home a baby bearded dragon, you may notice that they’ll puff up from time to time. A common reason for this is that they’re not yet comfortable in their new environment.

Because of this, you should try to help them adjust to their new home (as well as to you). Make sure you provide them with a habitat that mimics their native environment.

First, they’ll need an enclosure that’s the right size. Secondly, you should provide them with a good substrate and add plants, rocks, and other decorations that will make them feel more at home in these natural-looking surroundings.

Once you’ve made sure that the tank setup is correct and you’re feeding your bearded dragon properly, make an effort to bond with them so they’ll accept you as a friend (we cover this in more detail later on). Speak to them with a soft, gentle voice and try offering a treat out of your hand. They should gradually feel safer in their home; and hopefully, the discomfort-related puffing will stop.

There are several other reasons in addition to stress why bearded dragons puff up. Humans and other animals often yawn and stretch when waking up from a nap. When your bearded dragon opens its mouth and puffs up, they just may be doing that! No one wants to feel stiffness, and bearded dragons are no different.

Expert Tip: If their mouth is wide open and they’re puffing up, they might also be trying to “pop” their ears by relieving pressure on their ear canals, much like we do when we’re ascending a hill.

As we’ve hinted at above, there are a number of reasons why bearded dragons may puff up their beards. Let’s look at some of them in depth.

This is probably the most common reason why bearded dragons puff up.

The use of a defense mechanism is a widespread behavior within the animal kingdom. By looking larger and more threatening, the animal tries to frighten off a would-be predator. Think of a cat arching its back and puffing its tail or a dog growling and showing its teeth.

If your bearded dragon has a habit of inflating their beard in a particular area or room, put yourself in their place and look for something that may seem threatening to them.

An object may seem perfectly harmless to you, such as a piece of clothing or furniture or even a toy, can look like a predator to your bearded dragon. Test removing various objects that might be bothering them and see if they calm down.

Expert Tip: It’s smart to avoid a lot of handling during this process. While it’s not common, their elevated stress levels will make them more likely to bite you out of fear.

The presence of another pet (such as a dog or cat) that inquisitively looks at your bearded dragon’s tank may cause the reptile to puff up as well. This is because they feel threatened by this large animal.

If you’re a new bearded dragon owner, they may even feel threatened by your presence. Try following a few simple steps to get them used to you.

First, increase their comfort level with being handled. Begin by placing your hand inside the cage and hold it in there for a minute or two (you can increase this gradually over time if needed). It may take several times, but they should gradually become acclimated to your scent and proximity.

Once your bearded dragon allows you to move your hand closer to him, place it underneath their body, making sure to support the legs and tail. Stop if they puff up, but if they allow you to pick them up simply keep them in a firm but gentle hold.

If they begin to squirm it’s a good idea to give them a break and try again later. Over time, they should let up on squirming and allow you to handle them more.

For the first month or so, try to spend at least 30 minutes every day with your new lizard (even more if you have the time). Be consistent about spending this quality bonding time with your bearded dragon, and they’ll eventually come to accept you as a loving owner!

2. They’re Getting Ready to Shed

Your bearded dragon instinctively knows when they’re about to start shedding some skin. To hasten the process, they may puff up to loosen the skin on their neck and body.

It’s important to note that not every bearded dragon puffs up when shedding time approaches. However, if yours does so in a regular cycle it’s possible that they’re simply anticipating a good shed.

From time to time, keep an eye out for dull or waxy skin around the head and take note if they puff this area up a bit.

3. They’re Trying To Attract A Mate

Although both male and female bearded dragons may puff up to the opposite sex, it’s more commonly the male who displays this behavior to attract the female and let her know he’s ready to mate.

By puffing up, the male also shows the female that he’s dominant and is making his intentions very clear. Some females may puff up toward males; others will just respond by bobbing their heads or waving their arms.

Unlike many other animal species, bearded dragons don’t experience a mating season during a particular time of the year. Instead, they’re prepared to mate about a month after brumation, a period of low activity and sleep during the cold or rainy seasons that’s similar to hibernation.

If your bearded dragon puffs up around another beardie of the opposite sex, the behavior is probably mating related. Don’t be surprised if they even inflate to impress a toy that is causing them a bit of mating confusion!

By nature, these reptiles are territorial and typically don’t like to share their space with other beardies of the same sex or size.

This is why it’s best to give each bearded dragon a separate tank. However, if they must share an enclosure, make sure the tank is large enough to give each animal sufficient space to feel comfortable.

Expert Tip: No matter what, it’s never a good idea for males to share a cage. This is pretty much guaranteed to fail no matter how bit the enclosure is.

5. Their Bath Water Is Too Deep

Some inexperienced owners think that they should only give their beardie a bath if they’re impacted or are having problems shedding. However, bathing is something that you’ll be doing regularly!

When giving these reptiles a bath, make sure the water isn’t above their shoulders. If the water is too deep, your bearded dragon will reflexively puff up in an attempt to float. Bearded dragons have an instinctive fear of drowning (we don’t blame them).

Although there hasn’t been a lot of research conducted on bearded dragons puffing up during or after a meal, there are a couple theories as to why there might be a connection.

The first is that by puffing up the bearded dragon makes more room in its stomach so it can eat more food. Remember, wild bearded dragons must fight for their food, which may sometimes be difficult to find. Therefore, they need to eat enough to hold them over to the next meal.

If you see a correlation between puffing up and mealtime, provide them with a smaller portion for the next meal and observe whether or not they puff up. After you’ve had a chance to see if this makes a difference, feed the rest of their regular portion a few minutes later.

Another theory is that because bearded dragons play the roles of both predator and prey, they puff up to scare their prey, as well as to appear larger and more threatening to a predator that might challenge them for food. In captivity, this behavior is more common when bearded dragons eat live food, such as crickets.

If nothing seems to be wrong and you can’t determine your bearded dragon’s reason for puffing up, it may be that they’re just happy!

This behavior may occur when your bearded dragon is taking part in a favorite activity, such as playtime or mealtime. They’re just showing off to let you know that they’re comfortable and they want to express their love toward you, the pet parent!

When a bearded dragon has puffed up their beard, it’s trying to tell you something. And it’s your job as the owner to figure out what that is!

As you can see, discovering the reason is not as tricky as it seems. If you use this post as a resource and look at the circumstances, the answer is usually quite simple.

And when you get more experience under your belt, you’ll stop needing this guide altogether. With time you’ll be able to understand the behavior of your beardie without any outside help! 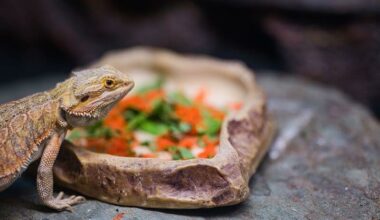 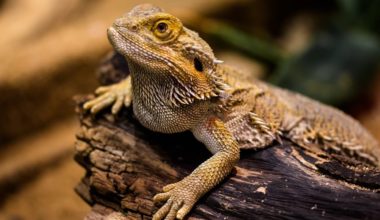 Read More
Finding and maintaining the perfect bearded dragon humidity is one of the most important jobs an owner has.…