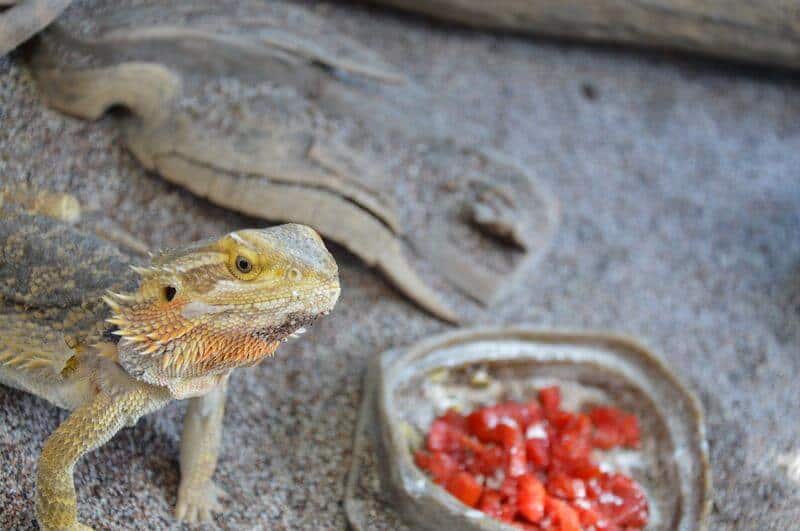 Many owners aren’t sure if bearded dragons can eat bell peppers or not, and it’s understandable. There are many peppers that can cause various digestive and nutritional issues!

But are bell peppers one of them?

This guide will teach you everything you need to know about feeding bell peppers to your bearded dragon.

Bell peppers add a crunchy, colorful and tasty bit of fun to just about any meal. If you want to share the yumminess of bell peppers with your bearded dragon, it’s perfectly fine to do so when done in moderation.

Even though bell peppers contain plenty of vitamins and other nutrients, they don’t contain enough calcium for them to ever be a staple food. There are lots of other options that are higher in calcium, so bell peppers should only be given to your bearded dragon about once or twice a week.

It’s fine to give your baby beardie the occasional bell pepper, but there are other, healthier options. Baby bearded dragons need lots of calcium in order to grow properly and stay healthy. Bell peppers are too low in calcium to be anything more than a treat for your sweet baby or juvenile beardie.

You may discover that your bearded dragon doesn’t even like bell peppers. This is completely fine, and you can simple give them something else that they do enjoy.

As we already mentioned, bell peppers contain lots of vitamins and other goodies that can benefit your bearded dragon. However, these pet lizards require lots of calcium in order to remain healthy and strong, and bell peppers don’t provide very much of this all-important mineral. In fact, not having enough dietary calcium can lead to metabolic bone disease.

In other words, while bell peppers are perfectly fine for your bearded dragon to eat once a week as a treat, they don’t provide the complete nutrition that your pet needs.

Bell peppers are bursting with antioxidants that help to support immune system health, digestive health, and help to reduce inflammation. They also contain folate for cell and tissue health and potassium for a healthy, strong heart.

They also contain a plethora of vitamins including Vitamin B6, Vitamin E, Vitamin K1, Vitamin A, and Vitamin C. These vitamins are known to promote a healthy immune system, to maintain good vision and reproductive health, to create strong bones and to help with blood cell creation and clotting.

Feeding your bearded dragon bell peppers in moderation will provide them with the vitamins and minerals mentioned above, but there are several things to be aware of.

Bell peppers are around 90 percent water, so they can provide your bearded dragon with plenty of necessary hydration. However, too much water will give them diarrhea, so make sure to limit the amount of bell pepper consumption to about once or twice a week.

Another reason it’s recommended that bearded dragons only eat bell peppers once a week is that they don’t contain enough calcium to make them an appropriate everyday food item. There are plenty of leafy greens that are full of calcium, so load up your beardie’s bowl with these better choices instead.

Bell peppers provide lots of Vitamin A, but this can be too much of a good thing. When your bearded dragon is getting Vitamin A in its supplements and then eats Vitamin A-rich peppers, they may experience an overdose of the vitamin. This can lead to swelling, weight loss and lethargy. This is not a very common occurrence, but we suggest talking to your veterinarian if you suspect a Vitamin A overdose.

As mentioned earlier, bearded dragons should eat bell peppers no more than once or twice a week.

If you give your bearded dragon a little more, then it’s fine, but you should try to keep it to a minimum. Given too often, bell peppers may cause digestive upset and other health issues, and there are many more healthier options out there.

If you want to let your bearded dragon eat bell peppers, then there are a couple of things to keep in mind. First of all, always give your beardie a raw bell pepper. Cooked bell pepper loses some of its nutritional value and water content during the cooking process, so raw pepper is best.

Bell peppers come in so many gorgeous colors, but the red ones are what we recommend. Of course, it’s totally fine to add some of the other colors to your beardie’s salads, but red bell peppers are thought to be the most nutritious.

If it’s possible, you should only let your bearded dragon eat organically grown bell peppers. Non-organic produce is usually covered in a variety of pesticides, so organic, pesticide-free bell peppers are best.

Bell peppers should be given as a part of your pet’s salad. When combined with a leafy green, such as kale, and other treats, like sweet potato, green beans, or some fruit, bell peppers will add crunch and taste.

Remove the top of the pepper, take out the seeds and membrane and chop the pepper into small pieces. Small pieces are easier to eat, and your bearded dragon is more apt to get more of the salad items with each bite.

Bearded dragons can eat bell peppers, but you need to limit them as a snack in moderation. As long as you do that, you’ll be just fine!

If you have any questions about this food or anything else beardie-related, we’d love to hear from you! Just send us a message or reach out to us on social media. 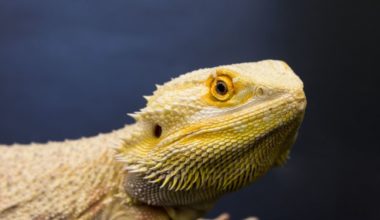 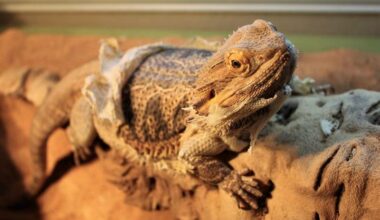