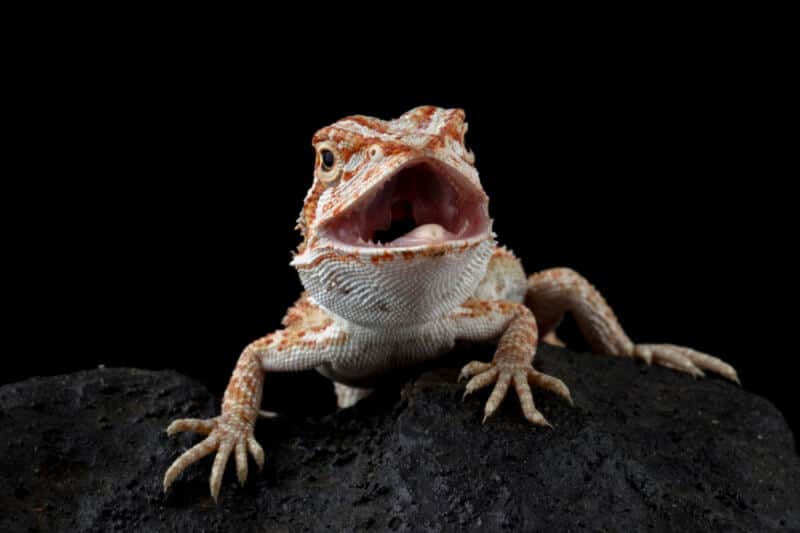 Many potential owners want to know if bearded dragons make noise or not before they get one as a pet. This makes sense, because reptile noises can vary quite a bit depending on the species!

This guide will cover all of the bearded dragon sounds you might hear, and what they mean.

In general, bearded dragons are known to be fairly quiet. Some lizards, such as geckos, have vocal cords and are very chatty and loud. However, bearded dragons do not possess vocal cords and are only able to communicate through the use of body language. Examples of this kind of body language may include behaviors such as arm waving, head bobbing, and skin color changes.

But this doesn’t mean that bearded dragons can’t make noise. They will, on occasion, make hissing, burping, whistling or other sounds, but even these sounds are pretty low-key.

Because bearded dragons are, in general, a fairly quiet type of reptile. That means making noise is often a sign of illness or distress. Let’s explore some of the most common bearded dragon sounds you may hear and discuss what they might mean.

Hissing is a fairly common noise that many bearded dragons make. It’s usually caused by stress, anxiety, new situations, or a chaotic atmosphere. If you hear your beardie hissing, and it’s puffed up or has changed color, then it’s giving you a signal that it’s irritated and may even be ready to bite.

Expert Tip: You may hear your beardie, especially a new one, hiss during training or handling practice. In most cases, this behavior will slow down or stop once your beardie gets used to you and its new surroundings. This hissing sound is not caused by a feeling of aggression. Instead, it is a defensive response that lets you know that it’s not happy with the current situation or atmosphere.

If your bearded dragon is shedding, it may hiss because it’s feeling uncomfortable and doesn’t want to be handled or disturbed. It may also hiss because it’s unhappy with the way you’re  approaching or handling it.

Don’t pick up your lizard while it’s hissing, because there is a chance that it will bite you or slap you with its tail. Instead, try to find out what is troubling your pet, so you can make it feel more comfortable, happy and safe.

Once in a while, a bearded dragon will make a noise that is often compared to a cat’s purr.

While a cat purrs when it is feeling happy, a bearded dragon that is making a purring sound is usually not feeling well. A soft purring sound is often the sign of a respiratory infection or an issue with the nose. Take your beardie to the vet if you hear purring, or if you suspect that your pet is unwell.

In most cases, any squeaking that you hear coming from their enclosure is just the sound of your bearded dragon rubbing up against the glass of its enclosure. A squeaking sound can also be from the dragon scraping its nails across the glass.

However, if you hear some squeaking that’s clearly coming directly from your pet, then this is often a sign of a respiratory problem that should be dealt with right away.

After your bearded dragon is done eating, you may notice that it makes a noise that sort of sounds like a burp. It’s not the kind of burping sound that a human makes. Instead, it sounds a bit more like your beardie is getting ready to throw up. This is perfectly normal, and they’re just trying to release gas from its digestive system.

If your beardie continues to make this sound, then there may be something more serious going on. A lot of burping is often a sign of impaction. This is especially true if the continued burping is heard in conjunction with labored breathing or other signs of distress. If you suspect an impaction, take your beardie to the veterinarian right away because impaction can quickly develop into a very serious situation.

Huffing is another bearded dragon noise that’s associated with eating. This is a normal sound for a bearded dragon to make, and it happens as they try to ingest their meal. The huffing sound that you hear is simply your pet inhaling and exhaling as it eats.

However, it can be hard to tell the difference between a bearded dragon that’s huffing and one that’s coughing. Seek a veterinarian’s advice if you think that your pet may be sick.

You may, on occasion, hear your beardie making a soft, whistling sound. In most cases, this noise is caused by something stuck in its nostril and is nothing to worry about. There may be a flap of skin covering part of the nostril, or the noise could be coming from a piece of substrate or other object that’s become lodged there. Carefully cleaning the nose with warm water will usually take care of the issue, but objects that are located deep in the nostril should be removed by a veterinarian.

Chirping is a noise that you may hear coming from your bearded dragon’s enclosure. Since these reptiles can’t chirp, the usual culprit is a cricket that was left in the tank after feeding time. It’s important to make sure that all feeder insects, especially crickets, are removed from the tank right away. Crickets may bite or scratch your pet, so leaving even one in the tank can be harmful to your pet.

Expert Tip: A nice alternative to crickets is to try using Dubia roaches. Many consider them to be healthier than crickets, and they don’t chirp.

However, if you hear a sound that’s somewhere between a click and a chirp that’s coming directly from your beardie, this can be a sign of a respiratory infection or other illness. Call your pet’s veterinarian right away if you think that your bearded dragon may have an infection.

Hearing rasping or wheezing noises coming from your bearded dragon is never a good thing, and it’s almost always a sign of illness. Rasping is usually caused by parasites, a respiratory infection or yellow fungus disease. These conditions can often be prevented by properly cleaning the enclosure and maintaining the right temperature and humidity levels.

Wheezing is also a sure sign that your pet has a respiratory illness and may be in distress. Call your veterinarian right away if your beardie is wheezing or rasping because bearded dragons can go downhill very quickly if they are not given proper treatment.

Along with the noises mentioned above, there are other sounds that your bearded dragon might make while interacting with its environment. Let’s take a look at a few common ones.

As we discussed earlier, your bearded dragon may make a kind of huffing sound while it eats. Depending on what is on the menu, you will probably also hear them making crunching, chewing, popping, or grinding sounds. These are all normal noises for them to make, and there’s no need to worry unless it appears that your pet is choking or is having trouble swallowing.

Digging is a noise bearded dragons make that to drive their owners crazy if it goes on for too long. Bearded dragons love to dig, especially in a nice, soft substrate. The problem comes when they become frustrated with a substrate that is too hard or difficult to dig into. They will scratch and dig continuously out of pure annoyance.

A bearded dragon will often dig on the glass, slap its tail, or make other irritating sounds to protest its inability to dig. This will go on and on until you provide the proper substrate. You may have to try a few different substrates until you find one that makes your beardie happy and content.

Glass surfing makes a noise that every bearded dragon owner will experience at one time or another. It’s basically the noise that’s made when a bearded dragon either rubs its body against the tank glass, or it scratches its nails on the glass.

This irritating and cringe-worthy sound may mean a variety of things. Sometimes it means that they’re hungry and are trying to communicate with you. It can also mean that they want to get out of the tank, that it sees something that is interesting to it, or it may just want some attention from you. As awful as this sound can be, glass surfing is one way that a bearded dragon can express to you what it wants or is feeling.

As you can see, bearded dragons make a handful of different noises. These will depend on what they’re doing and how they’re feeling, so being able to understand them will make ownership a whole lot easier!

If you have any questions about the noises we’ve covered in the guide above, send over a message. We’ll help you out! 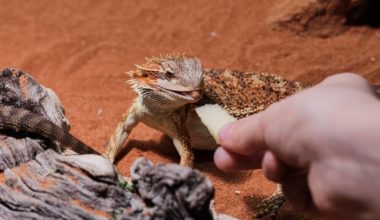 Read More
“Can bearded dragons eat apples?” is one of the most common questions we get from newer owners (especially…
RResources 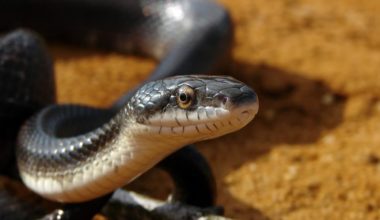 Read More
One of the most overlooked parts of a reptile enclosure is the cover. While everyone usually spends time…