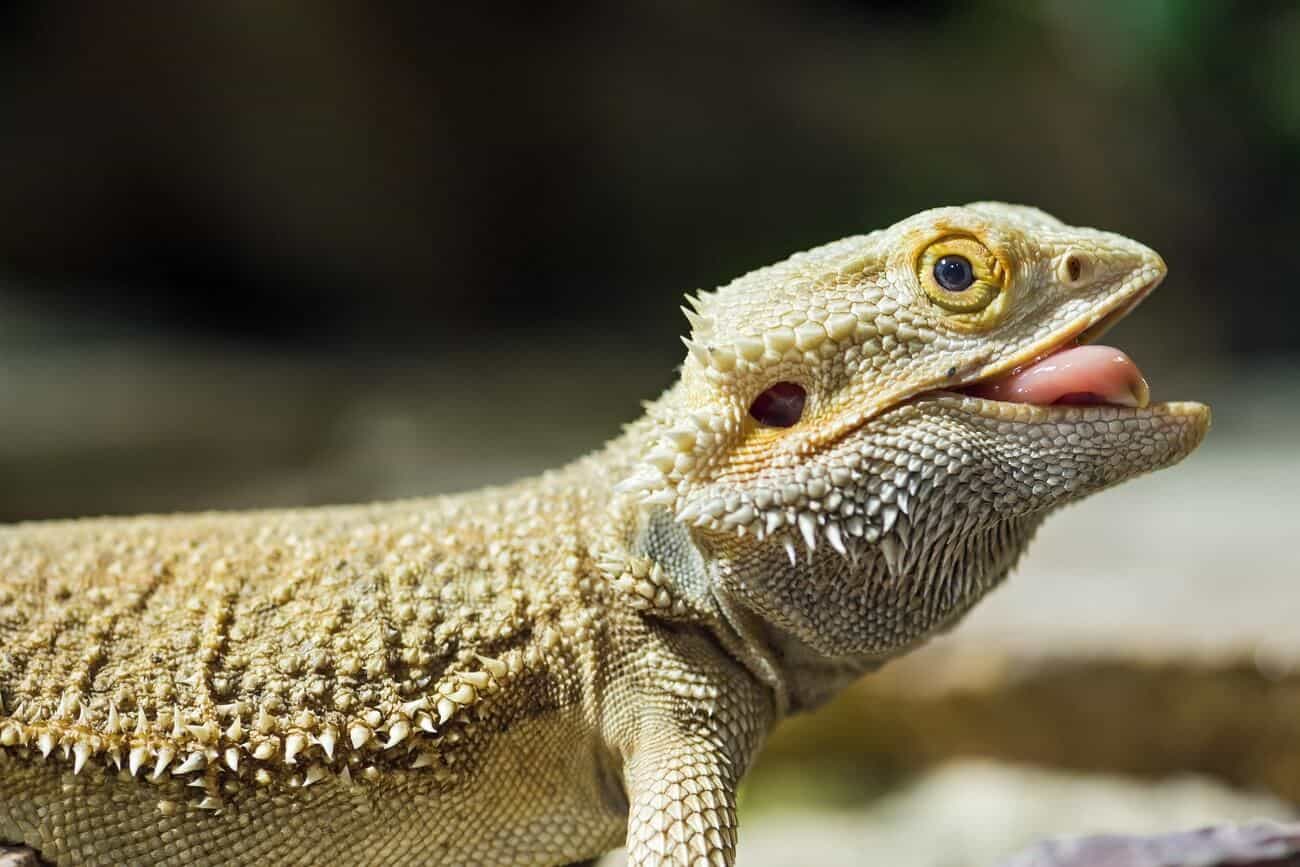 How Many Crickets To Feed A Bearded Dragon (Baby-Adult)

Knowing how many crickets to feed a bearded dragon is incredibly important if you plan on owning one as a pet. Crickets will be a major part of their diet, so you need to be familiar with the right quantity!

But it’s a little trickier than you might think.

The number of crickets you should feed your bearded dragon will change over time. Their needs as a baby, juvenile, and adult are all different!

Luckily, we’ve covered everything in this guide.

How Many Crickets Should You Feed A Baby Bearded Dragon?

From birth until 3 months of age, your bearded dragon is considered a baby. Just like babies in other species, baby bearded dragons will need more frequent feedings throughout the day in order to maintain their health, maximize their lifespan, and grow big and strong.

It’s important to allow your baby dragon to take in as many crickets as it can during each feeding session.

There should be 5 separate feeding sessions per day that last about 5 to 10 minutes. Never force your dragon to eat, and do have enough crickets on hand before you begin.

If you want to get really fancy you can estimate the number of crickets by referencing feeding charts that factor in age, size, health, and so forth.

To provide a general range, baby bearded dragons may eat between 25 and 80 crickets in just one day. As these lizards continue to grow, they’ll need fewer crickets and will begin to transition to more greens in their diet later.

How Many Crickets Should You Feed An Adult?

If you’re a bearded dragon owner, you’ll need to know how many crickets to feed your little reptile friend! With crickets being such an important part of their diet (more on that later), it’s one of the most important foods to understand.

Adult bearded dragons should eat a diet of 80% greens and 20% proteins. And when they’re younger, these lizards should get most of their protein from insects (with most of this coming from live crickets).

Bearded dragon owners should offer full-grown adult bearded dragons roughly 10 crickets per day, or 20 crickets every other day. The crickets should be offered in one feeding session per day that lasts between 10 and 15 minutes.

There are some criteria to consider when determining what, when, and how long an owner should let their bearded friends chow down on crunchy crickets. These important factors to consider include:

Bearded dragons should be allowed to eat as much as they desire during each feeding session especially when very young. Gradually, the 5 times a day feedings of baby bearded dragons will be cut back some to about 2 to 3 feedings per day as the beardies become juveniles roughly at 3 to 8 months of age.

Eventually, these reptiles will develop into full-grown adults that will eat significantly less than before. That’s because they’re pretty much done growing once they hit about 18 months of age.

Expert Tip: Some bearded dragon experts feed their pets crickets every other day or every third day after the dragons become adults. This is where things become more situational based on your understanding of their appetite.

How Large Should The Crickets Be?

Unlike a dog, bearded dragons will not overeat even if you leave out enough food to last the entire day. Interestingly enough, the cricket’s size that you feed your baby bearded friend should be smaller than the crickets that a fully grown dragon should be eating.

This makes feeding them quite easy!

Expert Tip: Even though a bearded dragon is unlikely to overeat, they’ll still have trouble is they ingest crickets that are too large for them to safely eat. This is because the sharp structures that make of the body of the cricket can become stuck inside the beardie, causing painful impaction of the digestive tract that may result in serious internal problems.

A good rule of thumb is to only use crickets that are no bigger than the space measurement between a bearded dragon’s eyes. Following this rule makes it easy to keep your pet lizard out of harm’s way!

When bearded dragons are between 3 months and 8 months of age, they are usually considered a juvenile. During this time, your dragon will continue to grow in a rapid fashion (although it will be a bit slower than their first 3 months of growth).

When your beardie becomes a juvenile, it’s important to continue feeding them crickets for protein. However, you’ll want to drop the number of feeding sessions down to 3 times a day.

Expert Tip: This equates to around 25 to 50 crickets each day. Continue to allow them to eat as much as they want during each feeding, and keep each feeding session roughly 5 to 10 minutes long.

After your juvenile bearded dragon reaches about 9 months of age, they are considered to be older juveniles (but not yet adults). Some pet owners jokingly refer to their dragons as teenagers at this age!

When your beardie reaches this age range, drop the cricket feeding times down to 2 times a day rather than 3. As they approach the age of 14 months, you’ll begin to introduce more greens into the pet’s diet.

This will begin the transitional period of increasing the number of greens compared to how many crickets they eat. You’ll continue this until they have reached a standard adult diet. Remember that adult bearded dragons should eat 80% of their diet as greens and only 20% of their diet should be proteins like crickets or roaches.

How Age Impacts How Many Crickets They Eat

Owners of bearded dragons should have a basic idea of how many crickets to feed their little pets as they grow older.

As we mentioned earlier, it’s best to not limit how many crickets they eat especially when they’re considered babies (in their first three months of life). Bearded dragons will not overeat, so it is not necessary (and can actually be dangerous) to try to force them to eat more or less than they seem to want.

As your favorite reptilian friend becomes older, the number of cricket feedings per day will gradually decrease. After about 14 months of age, shorten the twice-daily feeding sessions in time. For example, at 13 to 14 months, give your bearded just 5 minutes to eat rather than the 10 minutes they were given earlier.

The Importance Of Feeding Them Living Crickets

Individuals wanting to own a bearded dragon should take the time to understand the need for live crickets rather than dead insects.

In short, never feed your bearded dragon dead crickets or other dead insects. This also means it’s important to avoid leaving any uneaten portions of the crickets inside of your beardie’s tank when the feeding session is complete.

Reptiles, including bearded dragons, will naturally want to eat some dead crickets depending on how much the insect body has decomposed in the elements. The problem is your beardie could become very ill if they eat crickets that have begun decomposing.

The easy way to avoid this is by never leaving dead crickets inside your bearded dragon’s habitat. That will prevent this serious issue from occurring in the first place.

Also, remove any uneaten greens, as they too will begin to wilt and become contaminated with bacteria or mold that can harm your pet’s health and make the dragon sick and unhappy. Treat this as an extension of your normal spot-cleaning duties as an owner!

Why Crickets Are Such An Important Part Of Their Diet

In the wild, bearded dragons spend their day hunting for hopping insects like crickets. Crickets tend to capture the interest of nearby beardies when they hop from one spot to another (they aren’t very stealthy).

Like other predators, your bearded dragon will enjoy chasing, stalking, and chowing down on their cricket prey. Crickets are not only a healthy source of protein, but they’re also a great source of enrichment for bearded dragons in captivity. Chasing them around gives your reptile enough exercise to remain in good health.

Expert Tip: Crickets, like some other insects, have the potential to carry harmful parasites that could infect your pet lizard. This is why it’s so important to purchase your crickets from a reliable and trustworthy seller.

What’s interesting is that insects like Dubia roaches are actually less likely to carry parasites, are cleaner than crickets, and contain more protein in a smaller portion.

So why the love for crickets?

The answer is simple: bearded dragon owners often prefer crickets as they are more readily available and tend to be less expensive than other types of protein-heavy food options. In general, crickets are a safe bet for bearded dragons as long as the owner is aware of the slight risks for parasite related issues.

You can also increase how much nutrition your bearded dragon gets when they eat crickets by gently dusting these insects with powdered minerals like calcium and vitamins before feeding time.

There are a number of other protein food choices for bearded dragons as well. These include certain super worms that offer quite a lot of nutritional value. These can be good to include if you want to bring a little extra variety into their diet.

But at the end of the day owners will save significantly more money by choosing crickets as a primary protein source in their diet. To make things even better, crickets typically contain a lower amount of fat than other dietary protein sources for bearded dragons including most common worms fed to reptiles.

Some Things To Be Aware Of

Crickets sometimes sing all night, so bearded dragon owners may want to consider where the reptile tank is located (especially at night). This is something that many new owners don’t consider!

Always consult with a vet if your bearded dragon seems to be uncomfortable, sick, or is refusing to eat. This can prevent further harm from coming to your pet if your bearded dragon has become impacted by larger cricket pieces (additional feeding will only make things worse). A vet with bearded dragon experience can be invaluable resources when needing dietary advice or illness prevention tips regarding your dragon.

All in all, once you know what to expect when it comes to feeding crickets to your bearded dragon crickets, both you and your pet should enjoy each other’s company for quite a long time!.

Once you know how many crickets to feed a bearded dragon at each stage of their life, everything becomes quite easy.

Simply understanding how their needs shift as they age will make you a more informed owner, and allow you to provide better care to your beardie. This not only goes for cricket feeding, but for everything else too!

If you’re a newer owner simply stick with the recommendations we listed in this guide. All you have to do is keep things simple, and you’ll do just fine. 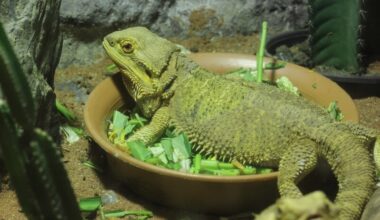 Read More
It’s quite common for newer owners to wonder if bearded dragons can eat kale or not. This veggie…
RResources 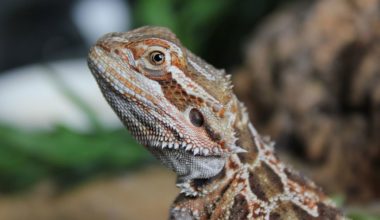 Read More
Bearded dragon impaction is something that many owners are afraid of. And for good reason. If left untreated,…