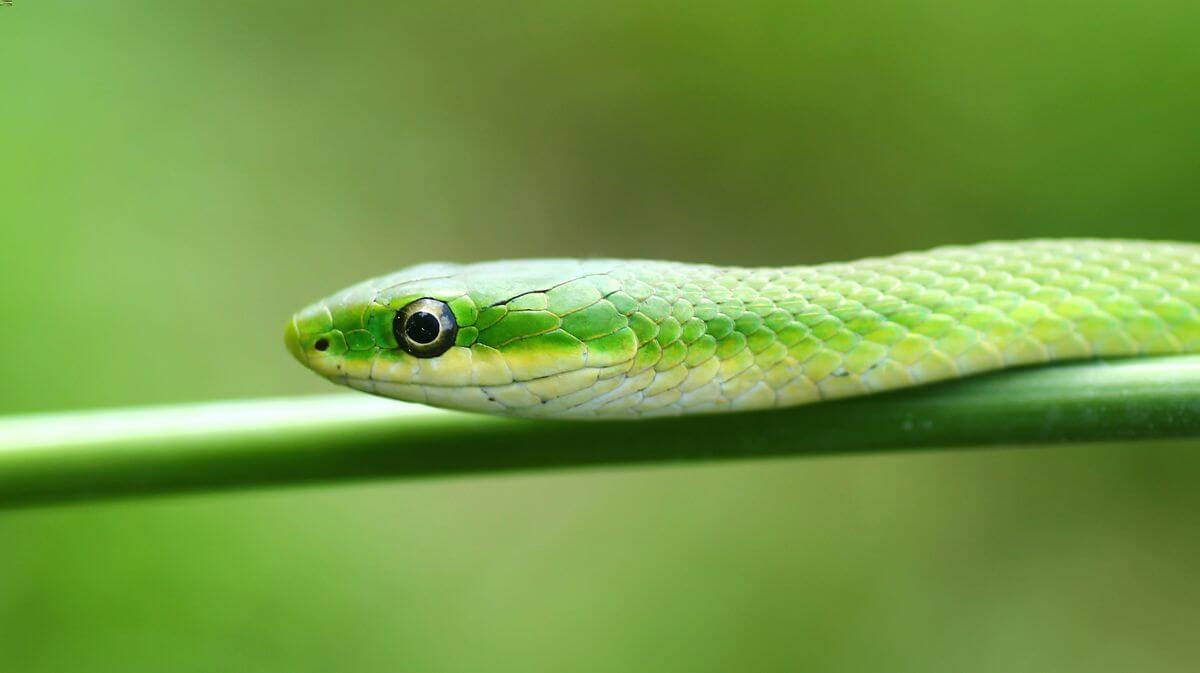 Snakes that don’t eat mice or rodents in general are rather unique. In fact, many people don’t even know they exist!

Snakes that eat insects as their main source of nutrition seem unusual because you rarely hear about them, and there aren’t many out there.

Garter snakes are very common in many parts of the United States. You may have even seen some in your own backyard. Garter snakes have one to three stripes that run along the length of their body. The stripes can be red, yellow, white, greenish, blue, or brown. These snakes have a checkerboard pattern between their stripes.

Garter snakes are a good choice for people who prefer smaller snakes, as they rarely measure more than 39 inches in length

Ribbon snakes tend to have brighter stripes than garter snakes. Ribbon snakes also have longer tails, generally making up one-third of the length of their body whereas a garter snake’s tail is only one-fourth of its total body length.

Garter snakes do eat rodents, but they also eat other animals (such as frogs, insects, tadpoles, lizards, earthworms, snails, leeches, fish, and slugs). If you choose not to feed your garter snake rodents, you need to feed them a varied diet to ensure all of their nutritional needs are being met.

When feeding your garter snake nightcrawlers, cut them into small pieces because their muscular bodies allow them the ability to crawl back up after being eaten.

If you feed your snake a diet containing a lot of fish or earthworms, you’ll need to add a supplement to their diet in order to meet their nutritional needs. Also, don’t feed your snake red wigglers since they are toxic!

Expert Tip: Be cautious if you decide to feed your snake any frogs, tadpoles, or toads because they can sometimes contain parasites that can make your snake ill.

African egg-eating snakes are nonvenomous snakes that exclusively eat eggs (instead of rodents). They are found in wooded or forested areas, primarily in Africa.

These snakes have a unique physical makeup that allows them to eat eggs as their primary source of food. Their mouths can open to enormous proportions, and the snake’s teeth are quite small, allowing them to swallow chicken eggs whole.

Expert Tip: They also contain spines located on the inside of the neck that extend into the esophagus that break the eggshell of an egg when it’s swallowed. The contents of the egg are extracted, and the eggshells are regurgitated.

African egg-eating snakes are on the smaller side, measuring approximately 30 inches in length. It can be difficult to find eggs small enough for babies to eat. Babies may do well with quail or finch eggs while adults may be able to eat chicken eggs.

It is not unusual for these snakes to go months without eating after they have had a big meal. As long as your snake is drinking and behaving normally, they are probably fine. If your snake stops drinking or starts behaving abnormally, you should take them to your veterinarian.

Rough green snakes don’t eat mice or rodents, and instead eat insects and a variety of other critters.

These thin snakes have bright green backs, yellowish bellies, and are found in North America. They are also docile and rarely bite, which is great news if you’re an interested owner! If they do bite, their bites are harmless as these snakes are nonvenomous. Though these snakes are docile in nature, you should keep handling them to a minimum because these snakes tend to become stressed out very easily.

Rough green snakes feed on insects and vertebrates instead of rodents. Insects these snakes eat include crickets, caterpillars, spiders, moths, and soft-boiled beetle larvae. They also eat some vertebrates including small lizards and tree frogs.

Water snakes prefer to live in an environment near a water source (hence the name). For this reason, they have adapted to get by without rodents and eat animals that live in similar environments, such as frogs and fish.

There are several different species of water snakes. As a result, these snakes’ markings and size vary widely. While some water snakes grow to be one to two feet in length, others can grow to double or triple that size.

Water snakes mostly eat frogs and fish, but you can also feed them insects and worms. If you choose to feed mostly fish or frogs, you should supplement your snake’s diet to meet all of their nutritional needs.

Expert Tip: Remember to be cautious about the frogs you feed your snake as they can contain hard-to-kill parasites that can make your water snake sick.

Even though water snakes don’t eat rodents, they may not make the best pet snake for a beginner. These snakes are more aggressive by nature, and while some will adapt to being handled, many others won’t.

Smooth green snakes typically eat a diet of insects and spiders, including worms, ants, snails, moths, spineless caterpillars, slugs, beetle larvae, crickets, and small roaches. Mice and other rodents are not in their natural diet.

As with rough green snakes, smooth greens snakes should be handled as little as possible. Being handled is stressful for smooth green snakes. A snake that faces constant stress may become ill or stop eating.

The Benefits Of Owning A Snake That Doesn’t Eat Rodents

There are benefits to owning a snake that doesn’t eat mice and other rodents.

First, some snake owners don’t relish the idea of feeding rodents to their snake. Many owners are squeamish about handling rodents, while others own mice or rats and can’t possibly imagine feeding them to their snake.

Second, feeding rodents to snakes can be messy. Warming up frozen-thawed prey under a heat lamp for your snake can cause the rodent to leak or rupture when a snake goes to eat it (ew).

Third, feeding live rodents to your snake may actually result in your snake being harmed. As crazy as it may seem, a live mouse or rat may bite your snake before they kill it, which can result in injury and infection. While this is uncommon, some owners prefer to avoid this risk given the amount of feedings that will take place throughout the life of their snake.

While all snakes are carnivores, there are a few things you need to be aware of when owning a species that doesn’t need to eat rodents as part of their diet.

If you get a snake that does not need to eat rodents, you will likely need to supplement their diet with calcium and a multivitamin. You may also need to feed your snake more frequent meals than snakes who eat rodents.

When you purchase a snake, it is always a good idea to ask the breeder or caretaker what they have been feeding the snake (and how often). If you’re not sure how much or how often to feed your snake, your veterinarian can also help you develop a feeding schedule that will meet your snake’s nutritional needs.

Does This Still Make You A “Real” Snake Owner?

Unfortunately, we’ve heard from plenty of people over the years who have been worried that owning a snake that doesn’t eat mice or rodents somehow means they’re not a “real” owner.

This comes from elitist snake owners who think that there’s only one way to do things, and anyone who goes against the grain is somehow not as amazing as they are. They discourage others online and try to make people feel bad about what they want to do.

This makes us quite unhappy, because it goes against everything that makes the herp community so amazing. The curiosity and eagerness to explore or experiment is something we’ve had a hard time finding elsewhere!

If you’ve seen anyone say that owning a snake that doesn’t eat rodents is somehow a less impressive task than a “normal” snake, ignore them. We actually think it makes you more unique and will broaden your skill set.

At the end of the day, all that matters is that you’re having fun and enjoying the wonderful experience that snake ownership is. There’s no right or wrong way to do it!

Now that you know all of the best pet snakes that don’t eat rodents, it’s time for you to make your pick. There’s a lot of variety on the list above, so take some time to think about what appeals to you most!

If egg-eating is interesting, go with that. If a snake that eats insects is more your speed, pick one of those instead.

No matter what you decide on, you’ll have a fantastic time owning any of the species on our list. It’s not bad to do things differently! 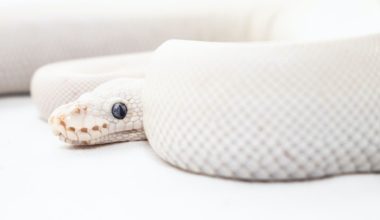 Read More
Figuring out why a ball python won’t eat can be extremely stressful (especially for newer owners). Unlike a…
RResources 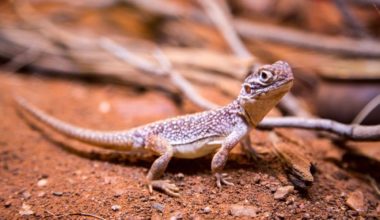 Read More
Picking a good lizard name shouldn’t be challenging. But for many owners, it is! They either get hung…