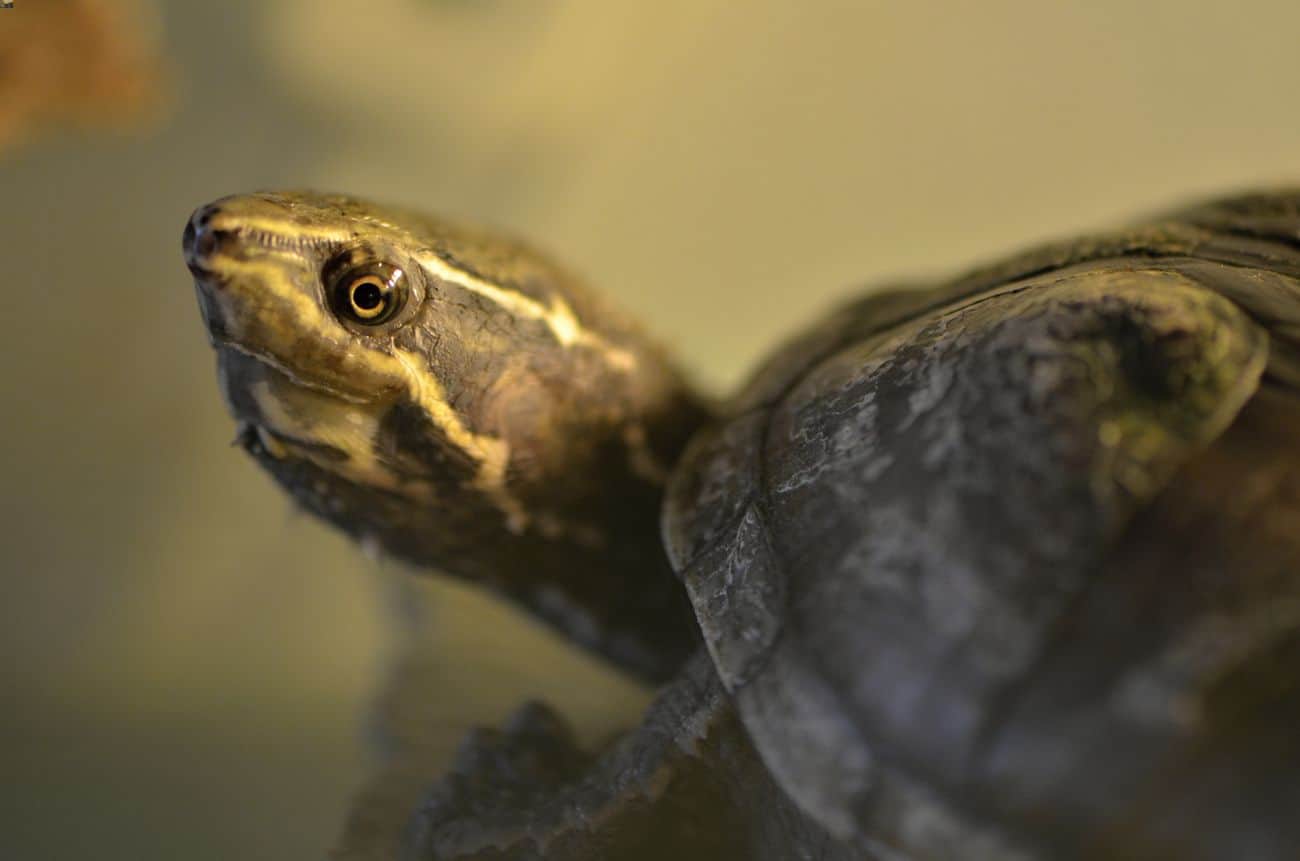 The common musk turtle is a very popular pet that many herp-lovers have considered at one point or another. They are relatively easy to care for, and quite fun to watch!

But there’s more to these turtles than meets the eye. Because of their unique temperament and condition requirements, it’s important to have a complete understanding of what kind of care they need.

This guide covers everything there is to know about common musk turtle care (plus some bonus facts that will come in handy). Give it a read and you’ll be ready to own one yourself!

The common musk turtle (scientific name: Sternotherus odoratus) is a turtle commonly found in the eastern United States. In the wild, this cute little turtle can be found in watery environments like rivers, ponds, lakes and streams.

Also known as the stinkpot musk turtle or eastern musk turtle, this reptile will often emit a foul smelling liquid as a defense mechanism. This will be discussed in more detail later on in the guide.

Even though common musk turtles are pretty easy to care for, they tend to not be a good fit for beginners. One of the main reasons is that they can have a bit of an attitude, which makes handling a bit tricky.

When you take a look at a common musk turtle it’s easy to see how it’s perfectly designed to blend in with the mud of its watery natural surroundings.

The carapace, that tends to flatten out as the turtle matures, can come in colors that range from brown and black to gray. Two parallel yellow stripes down each side of the head distinguish the common musk turtle from other musk turtles.

The shape of their head is exactly what you would expect from an aquatic turtle. It’s streamlined with sharp angles, and two tiny nostril openings can be found at the tip of their face.

Expert Tip: They also have rather pronounced nails that are hard to miss. These sharp little things can really dig into your skin when they’re trying to squirm out of your hands!

The typical common musk turtle lifespan is between 30 and 50 years when given proper care. In some instances these reptiles have surpassed the 50 year mark, but that’s uncommon.

This long lifespan makes the eastern musk turtle a great perfect choice for anyone who really wants to develop a long-term bond with their pet. It’s one of the best things about owning one!

The average size of an adult common musk turtle is around three to five inches long. Its small size makes it a good pet choice if you don’t have lots of room for a large enclosure.

However, this doesn’t mean you have to keep them in a small tank. These creatures love extra space (more on that later).

Common musk turtle care is considered to be a fairly easy task, but due to its long lifespan, you have to be sure that you are up for such a long-term ownership commitment.

Once you set up their tank with all the proper elements and you come up with a good diet and feeding schedule, caring for your turtle basically involves maintenance and observation.

As always, you’ll also need to keep a careful eye out for any signs of illness because early intervention and treatment can make a big difference.

One thing you’ll notice about the common musk turtle is that it really loves to swim. Because of this, they need a bigger tank than you would think, considering their size.

We suggest going with a tank size of 30 gallons for one adult turtle and a 40 gallon tank for a pair. But if you can go with a bigger tank, do it!

Expert Tip: When we say pair, we mean a male and a female. Two male common musk turtles should not be housed in the same enclosure.

Keep a close eye on the pair though. Male stinkpot musk turtles tend to be a bit overzealous in the love department, and females can become very stressed by the harassment.

Common musk turtles don’t require anything too fancy when it comes to their tank setup.

They are mainly aquatic, so you are not going to have to worry about a substrate or lots of enclosure enhancements. While a nice substrate can be aesthetically pleasing, it can cause a dangerous choking hazard.

These turtles are swimmers, so clean, unchlorinated water is going to be the main element to pay attention to.

Because we are sure that frequently cleaning your turtle’s tank is not going to be your favorite task, we highly recommend installing a filter into your tank. By using a filter that is specifically designed for shallow tanks, you won’t have to clean it as often.

Expert Tip: Even when using a filter it’s necessary to give the tank a complete cleaning about once a month.

Common musk turtles do require a place to bask and get out of the water, so placing a few stones, a turtle dock or some artificial plants around the tank, will work very well. Your pet turtle will also appreciate floating toys or pieces of driftwood.

Put their basking spot on the warmer side of the tank tank, and leave the other side open. Your turtle will go back and forth between the two areas.

As far as a water heater goes, get one that is designed for this type of tank setup, and make sure that the water does not get above the recommended temperature.

To give them as natural an environment as possible, it’s important to have their lighting on a 12 hours on, 12 hours off schedule.

Expert Tip: To avoid health issues, it’s a good idea to provide supplemental UVB lighting. Even though they should get most of the vitamin D3 they need in their diet, it never hurts to err on the side of caution.

This turtle does not need a high enclosure humidity level, and 30 to 40 percent humidity is perfect. This is usually taken care of by the presence of so much water, but you should check this level periodically just to be safe.

Since the common musk turtle lives in a water-based environment, you won’t need to supplement with added water. As mentioned above, make sure that the water in the tank is non-chlorinated and clean.

Expert Tip: Dirty water can quickly lead to diseases and other health complications for your eastern musk turtle. Pay close attention to this!

Like many aspects of common musk turtle care, feeding your turtle is really not too complicated. Being carnivorous, your musk turtle will enjoy items such as earthworms, ghost shrimp, crickets or fish. They will also eat turtle pellets and the occasional bit of greenery.

When you feed them, give them an equal amount of fresh prey and pellets. You can also throw in a small amount of shredded carrots or leaf lettuce if you wish.

Give your hatchlings meat or pellets every day until they turn six months old. After that, you can feed them every other day while adding in some vegetable matter. This is why it’s important to find out the age of your stinkpot turtles when you purchase them!

As with any pet, there are a few potential health issues that you will need to be aware of, and finding a veterinarian who has a good knowledge of turtle care is going to be very helpful.

If your musk turtle’s shell looks kind of whitish, and it seems kind of soft, it could have shell rot. It is usually not too serious, but it can progress if not addressed right away.

To help prevent this, make sure that your turtle is getting some basking time every day. This will give the shell some time to dry out, and it will give you the opportunity to scrub off some of the build up if necessary.

Make sure that your common musk turtle gets a routine fecal exam for parasites as well. This is quite important because parasites can build up quickly in your turtle’s system. Sluggishness, weight loss and runny stool can be signs of an overload of parasites.

Without a proper diet, eastern musk turtles can suffer from Vitamin A deficiency. This can lead to eye and respiratory problems, so make sure to add a vitamin supplement to their feeding routine.

Expert Tip: It’s a very good idea to observe your common musk turtle’s appearance and behavior on a daily basis. This is the best way to spot trouble before it gets out of hand.

Common musk turtles are spunky, curious and lots of fun to watch, and they spend lots of time swimming, playing and exploring. Even though they are basically nocturnal, you will still be able to observe plenty of activity during the day.

When they feel threatened or stressed, the common musk turtle will often release a very smelly and thick orange liquid from glands in the plastron. This is where the nickname “stinkpot” comes from.

Expert Tip: The smell can last for quite some time and is a pain to clean up, so the best course of action is to handle your turtle as little as possible. The longer you have your turtle, and the more it trusts you, the less it is apt to release this musk.

Common musk turtles are also known to be a bit nippy, so we recommend this turtle for more experienced turtle caretakers.

Common musk turtles are super cute, and it’s tempting to pick them up. However, this is highly discouraged for several reasons.

As mentioned above, these turtles often emit a smelly musk, and they tend to bite. These two factors should definitely discourage you from handling them too often.

These turtles are very happy when left to swim, bask and explore their surroundings. It’s important to respect this aspect of their personality, so sit back and watch them go.

Common musk turtle care is very simple, and should be quite manageable as long as you’re committed to keeping these turtles happy and healthy.

Watching them swim around the tank is something that never gets old. In fact, that’s what makes this species one of our favorite pet turtles!

We hope this guide prepared you for owning a eastern musk turtle, and you feel confident about going out and purchasing one for yourself. But remember, you can always send over any additional questions! 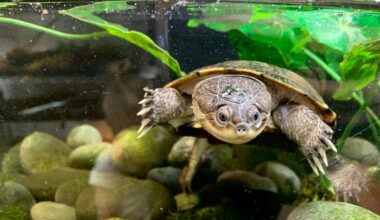 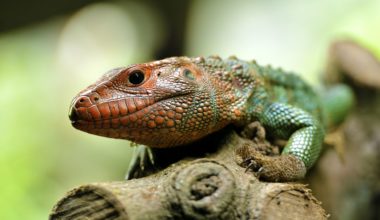 Read More
Caiman lizards are a beautiful and unique reptile that can make great pets for experienced owners. There really…